Sound Of The World

It has never been easier to capture sounds from anywhere in the world than with TASCAM’s lineup of portable recorders. The latest update to the Wi-Fi-enabled DR-44WL and DR-22WL added XRI – Extended Recording Info. In addition to smartphone control and file transfer, the recorders now capture recording setup info like filtering, gain, and input source. Another unique benefit of XRI is GPS Tagging when used with our free DR Control app.

TASCAM wants to hear your corner of the world, so we’re launching the XRI Competition. Candidates around the globe can win over $800 in recording gear from TASCAM by sharing their local sounds with the world. At the same time, those musicians gain new listens to their SoundCloud® pages to gain new fans.

Two runners-up will win a TASCAM TRACKPACK 2x2 bundle containing a US-2x2 interface, TM-80 microphone, and TH-02 headphones. The grand prize-winner wins our flagship US-20x20 USB3.0 audio interface, VL-S5 studio monitors, and a pair of TM-80 microphones. Winners will be chosen at the end of March, 2016.

Using TASCAM’s free DR Control app for iOS and Android, audio recordings can be uploaded directly to SoundCloud from your smartphone. Just tag the recording “#tascamxri” to enter the contest. Pick something unique – busses and waves sound the same everywhere, so capture language and unique sounds from your corner of the globe (or travels).

Best of luck to the entrants, TASCAM can’t wait to hear your unique sounds from around the world.

Click the markers on the map below to hear some current highlights:

1- The special website displays a map with red markers where sounds were recorded. The recorder used is also shown as an icon.
2-Click the icon to display the details of the recording. A photo of the recording location and data embedded with the XRI feature is displayed.
3- Click [Listen], and the sound hosted on SoundCloud opens in another window. Click the Play button to listen to the recording. Click on the Download button to download the sound file. 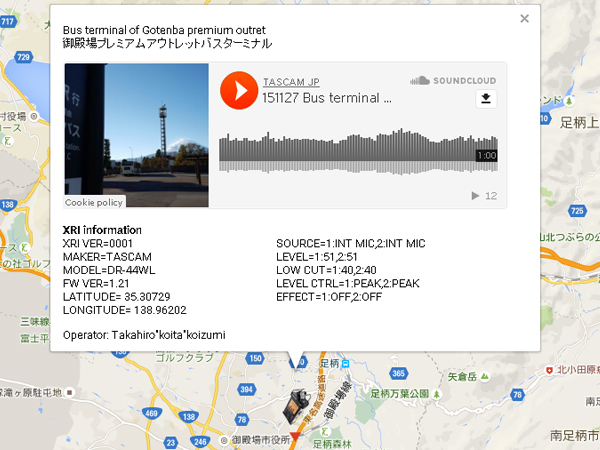